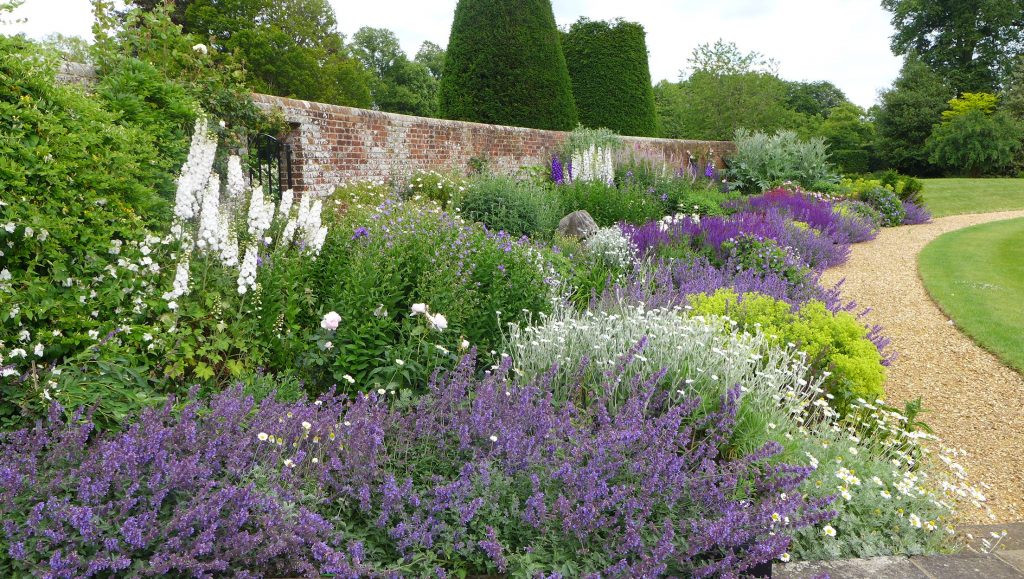 Herbaceous borders feature in many of our gardens, where space and time allow.

They were originally introduced as a garden feature during the Victorian period as new perennial plant species were introduced and the growing and planting out of bedding plants every season fell out of fashion.

A mainstream of  great country gardens, herbaceous borders have recently enjoyed a resurgence in popularity, often with the addition of structural evergreen shrubs and topiary, roses, and ornamental grasses, thus extending their period of interest. 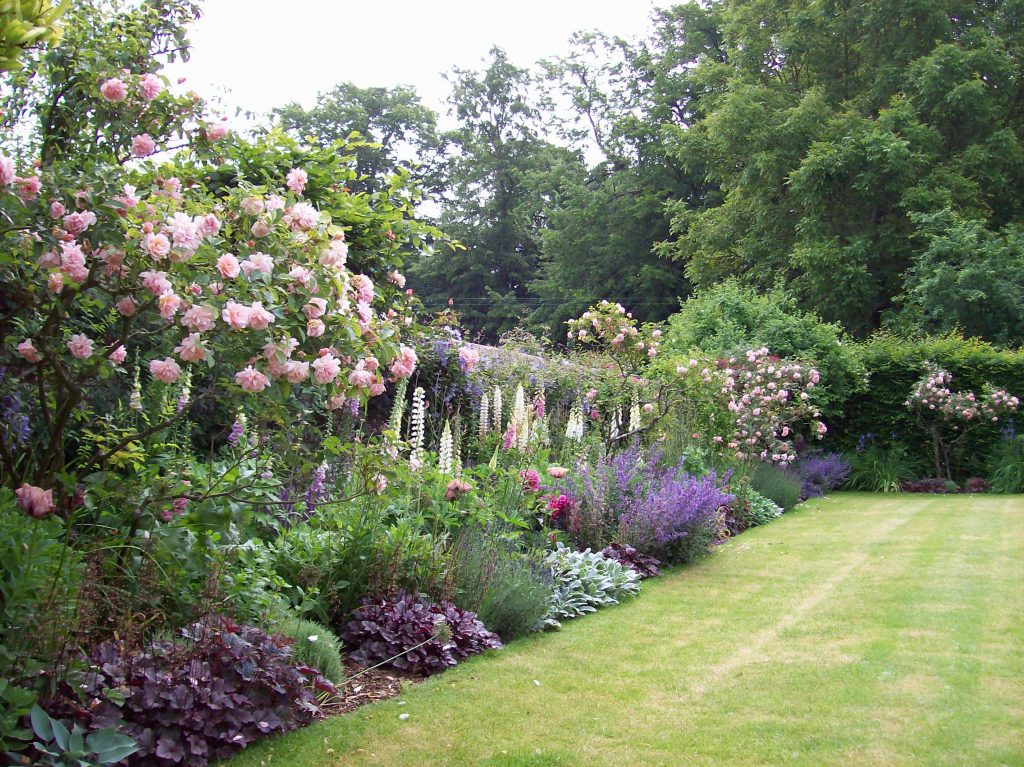 Traditionally, the main season of interest of herbaceous borders, runs from late spring to late autumn, and if planned well, is an everchanging, masterpiece of colourful, showy planting design. 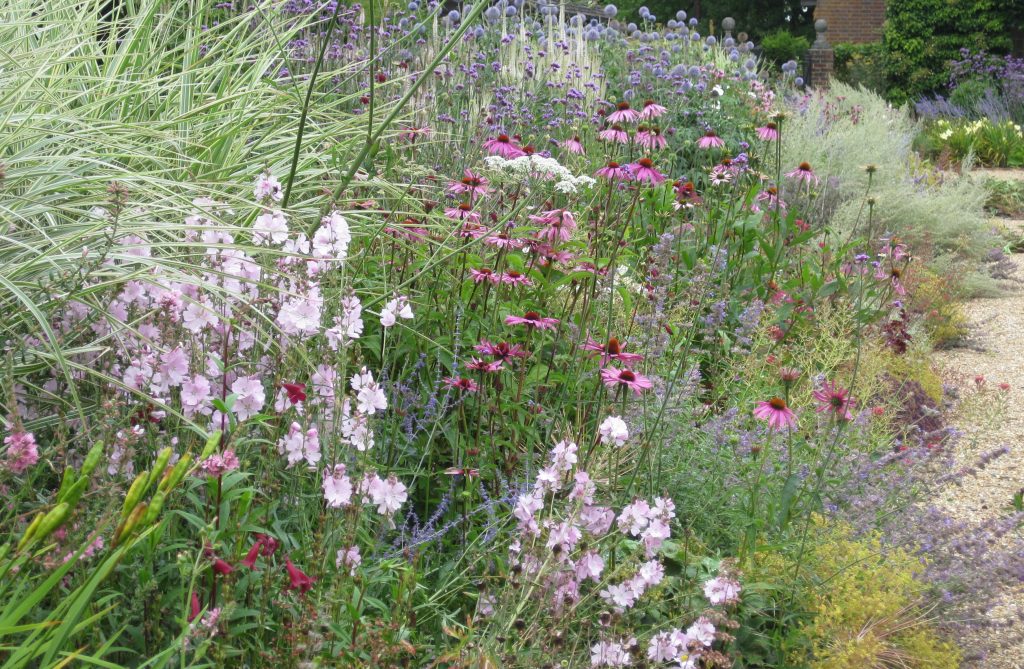 Adding bulbs helps to increase the flowering season, providing interest when the main planting has been cut back after flowering, before new growth starts to burst in late spring.  To achieve such a wonderful spectacle of the British garden in summertime is not for the faint hearted, but well worth the time and effort involved.

We always try to ensure that at least one area of a garden has a detailed flowering scheme, usually located where it can be regularly viewed from the house, or in a much-used area of the garden. This allows the rest of the garden to be considered in a simpler manner, reducing the overall maintenance requirements of the garden as a whole. 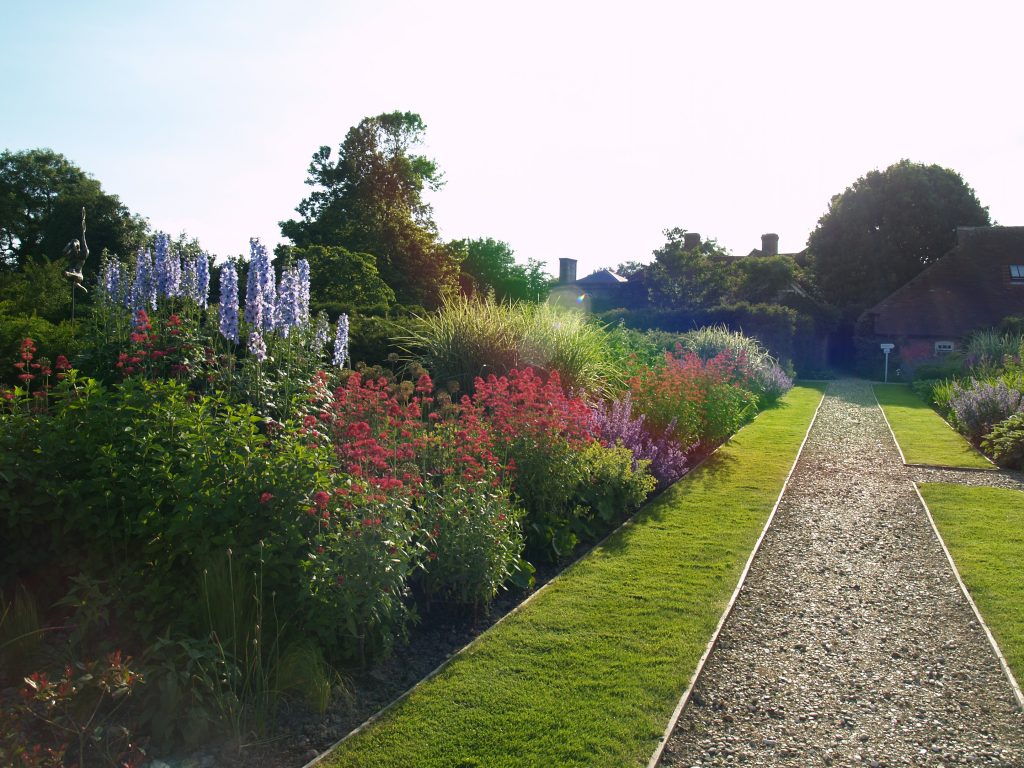 Rhythm is often talked about in relation to herbaceous borders and this can be created through repeating or drifting plants of the same or similar height, shape, texture, flower structure, colour etc. throughout the length of the border; but also through successional flowering, highlighting certain plants that flower at the same time, when others have finished, or are yet to start. Of course, as with any planting, soil, aspect, light levels and exposure all need to be considered at the outset when planning an herbaceous border. 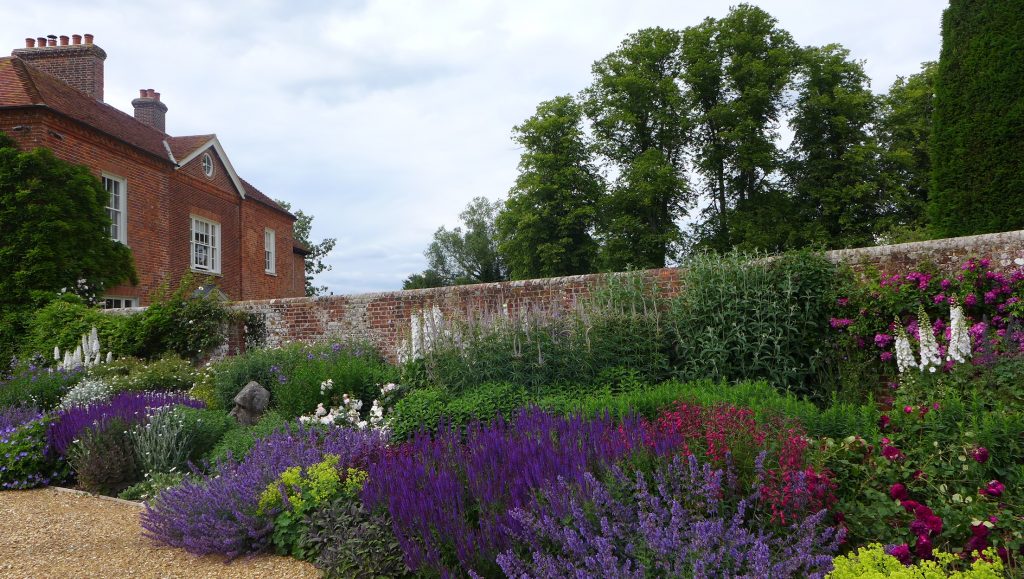 A well-designed herbaceous border will evolve throughout the season. Often described as painting with plants, herbaceous borders allow scope for artistic displays and creative combinations. The great Gertrude Jekyll, mastered the art of the herbaceous border particularly well in the late 19th and early 20th centuries, famously graduating colours along their length.

To be really successful, herbaceous borders should be as deep and as long, as space will allow. This gives the opportunity to create impact and a strong rhythm. The deeper the border, the taller the plants can be, increasing the drama, with an effect that’s pleasing to the eye. 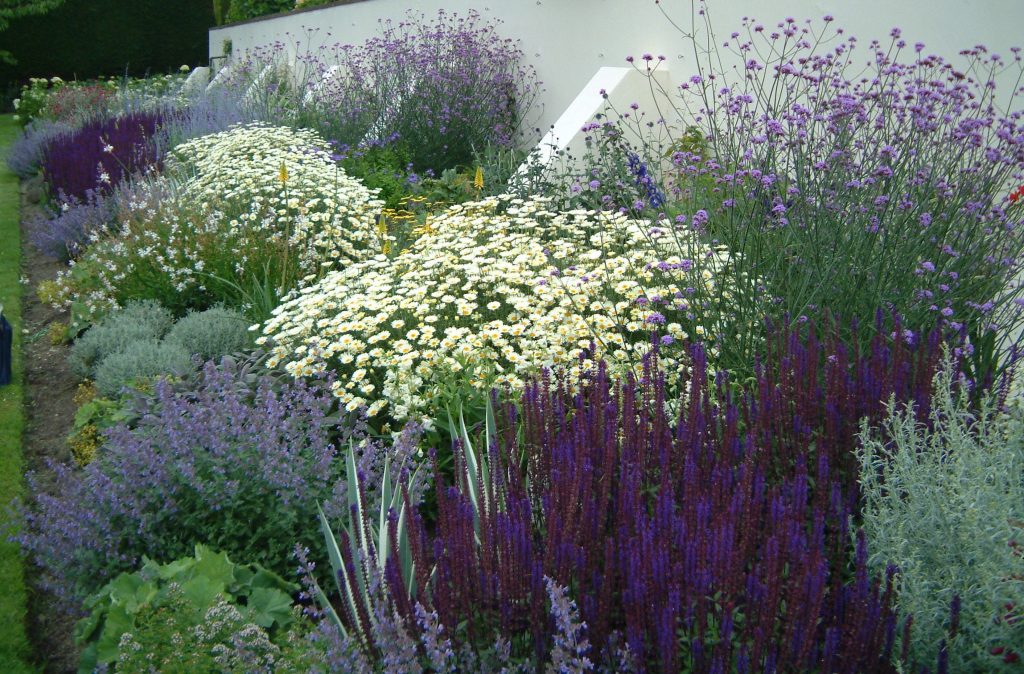 The strict Victorian/Edwardian rules of herbaceous border design are now often broken. For example, there is no longer a need to follow the rigid pattern of tall plants at the back of a border. It is now widely accepted to dot them from front to back. Herbaceous borders were traditionally planted purely with perennial plants, but now often include shrubs, bulbs, and annuals. They can also be contemporary in style, or traditional, anything goes! Events, such as,  The Chelsea Flower Show often create great expectations about what can be achieved in terms of flowering density and combinations. 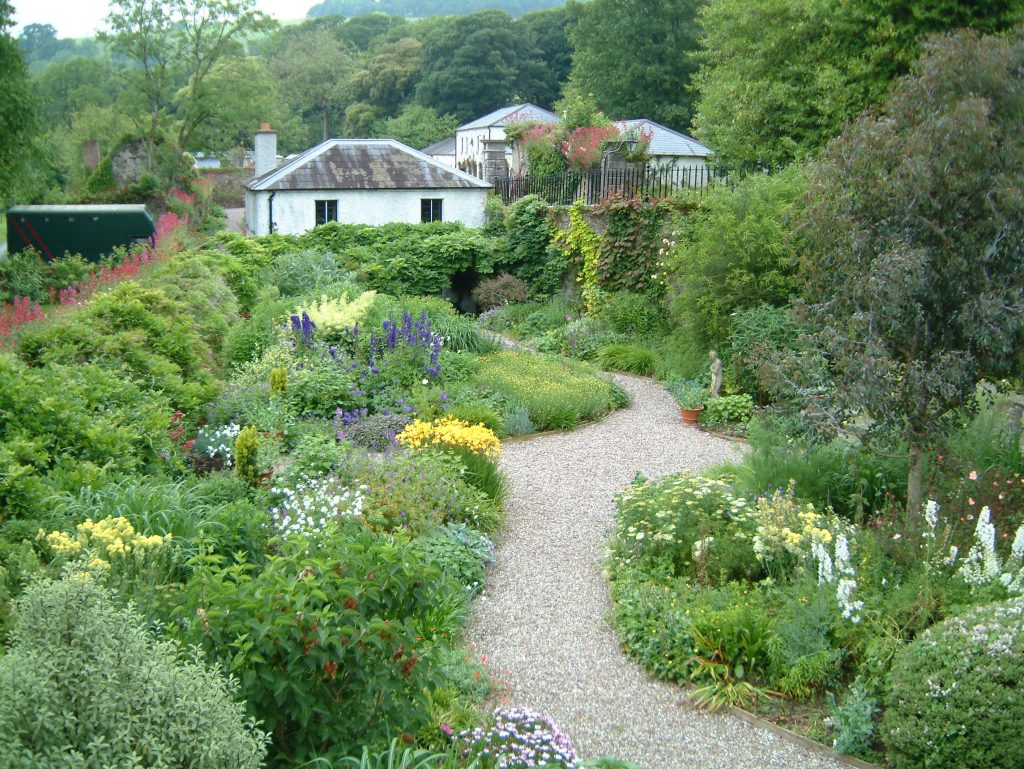 Mixing dark and light foliage in with the green foliage, gives a sense of depth and increased rhythm, lifting what could otherwise become quite a flat display. Purple foliage can relieve the monotony of green and be a good foil for flowers and other leaf colours; but if used too much it can make the border feel heavy and too dominant. Silver (Glaucus) or pale foliage plants work well dotted through the border to lighten and lift the planting. Schemes work best when a limited or restrained palette of plants repeats through the border, or when borders are planted in drifts, with some structure to punctuate the layout. 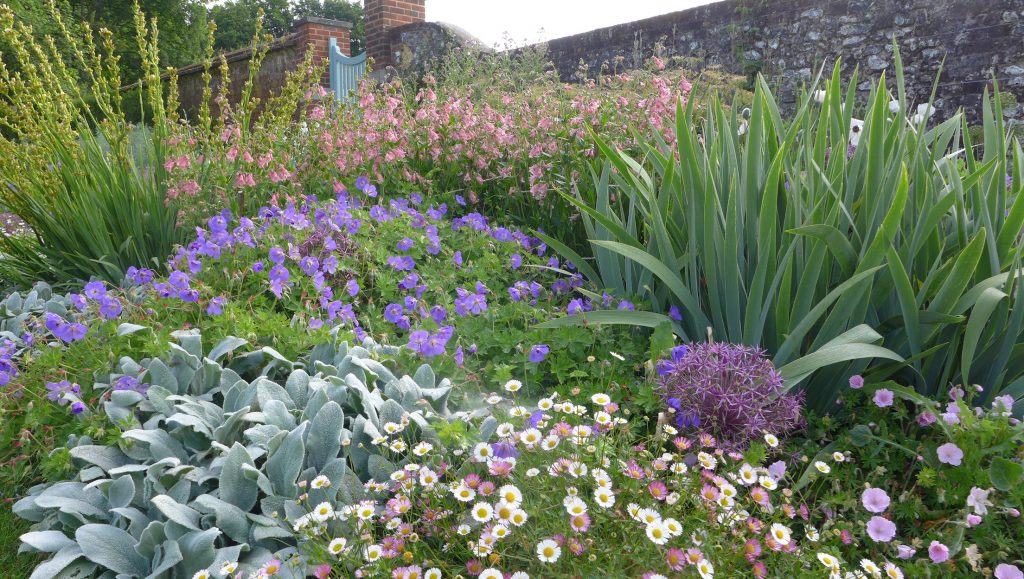 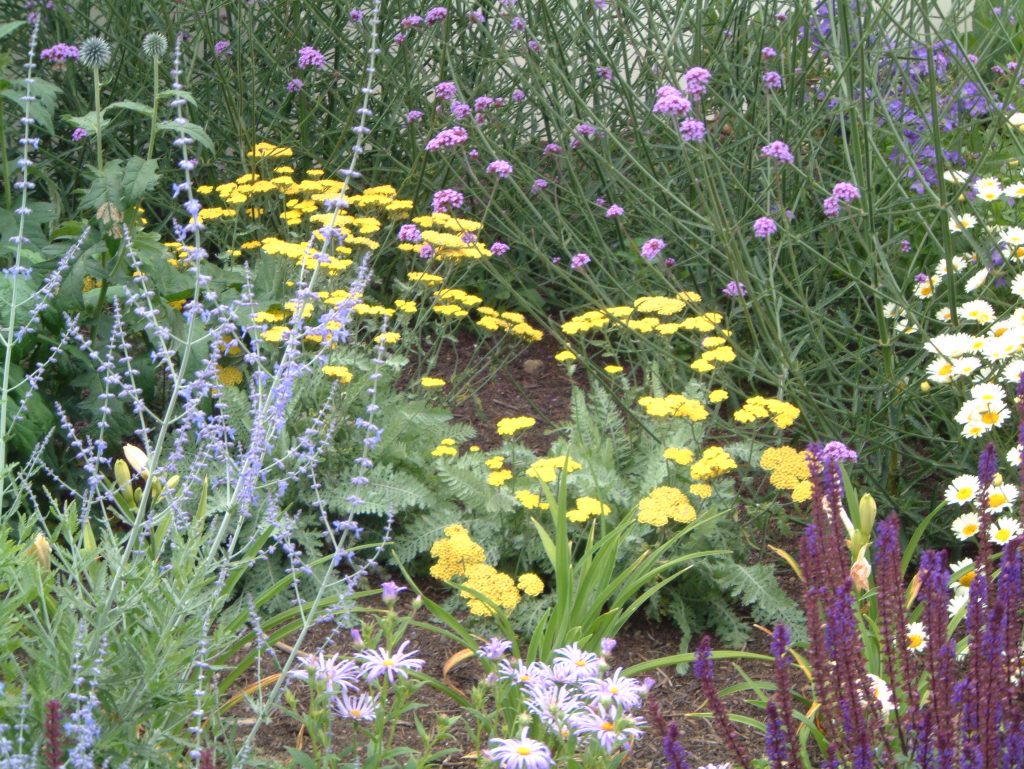 Herbaceous borders can be used to great effect, to create different ‘rooms’ within a garden, each with a different feel. You do not need to own a huge country garden to create a successful herbaceous border. It is true that space does help; but you can achieve great things, in even the smallest of gardens. 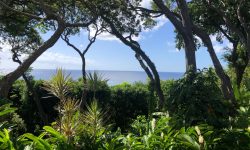 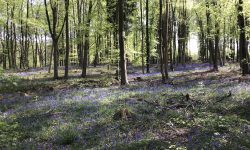